Guests from far away – greeting from a former employee and glimpse through 25 years of work. These were some of the program parts at the anniversary celebrations for DBM’s 25-years of humanitarian mission.

Almost 100 people participated in the annual meeting in the congregations house in Gram. The vast majority also took part in the prior dining. In connection with the evening meal they were able to see poster-sized images from DBM’s work. A long exhibition was also made with (almost) all versions of DBMnews from 1992 until 2017. Lastly, almost all of the book releases that DBM have made were also displayed. 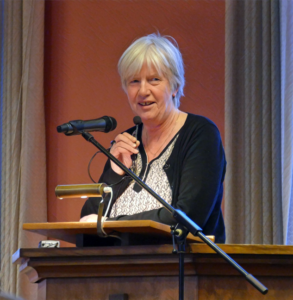 After the sermon, Gerda Skov led the assembly with a glimpse of the 25 years of work in photos. When only 15 minutes have been set aside, only a glitter can be given, so you can easily sit back with at least as many questions as information – because of the rich and saturated mission history from Europe’s often forgotten backyard – Romania.
There was also a time for greetings, where both greetings from Romania were read and greetings from Denmark. Marianne Højlund, previously employed by DBM, also opened a little for the amount of experiences in her greeting.

Then the assembly needed coffee – to get a little more official insight into DBM’s work through annual report and accounts. The annual report was presented by Niels Arne Skov, while Gerda Skov reviewed the financial statements.

At the subsequent election, the Board was re-elected. The only change was that Jørgen Boyskov from Gram was elected as a possible substitue. Niels Peder Nielsen from Silkeborg finished the evening.

DBM’s daily management and board look gratifying back on a festive and good evening, where so many gathered about the mission’s case.