After the choir visit ….

In the days around September 1st, the choir from Betania, the church DBM collaborates with in Pucioasa, visited a number of churches in Denmark (Grindsted, Tyrstrup, Rise, Gram + Sonderborg and Herning romanian churches). There were song evenings (or concerts if you want), so a large part of DBM’s friends was given the opportunity to meet the choir and enjoy their songs and music.

Both where DBM has a lot of friends and in churches, where the amount of friends is a little smaller, there was a great support. It was pleasing to experience the support and fellowship around DBM’s work – also in the donations that were collected.

The experience of the choir

The couple Aura and Marius Calin, who have also traveled as part of their jobs a physician and engineer, pointed out the responsible approach to everyday tasks that they could see in Denmark. “Houses and gardens are so well maintained. It is so different from Romania. You keep everything in order and always follow laws and regulations even if you do not risk being punished by an offense like driving the right way around a roundabout.” They also noted that Danes are incredibly good at getting the full benefit from resources like greens and fruit. “Maybe it’s because you’re so well organized that it’s up to you,” they say. 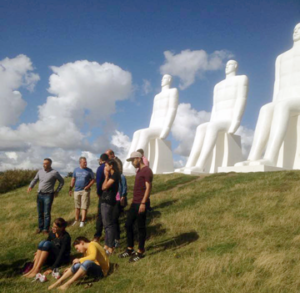 In particular, it made an impression on both Aura and Marius and the rest of the group to see the cleanliness in Denmark and not least to visit the ocean on both sides of Sønderjylland. Several of them had never ever seen an ocean with their own eyes. The experience together with the Danish traditions for building in respect for nature made an impression, for example. by seeing the statues “Man by the Sea” during the visit to Esbjerg.

Nick (Arjan) continues in the same line of pointing to Denmark as an incredibly beautiful country with a people with beautiful hearts. “You have shown us so much hospitality,” he comments. He mentions that the meeting with the Danish hospitality has motivated him to become more committed to passing it on to the Romas. “It has also given me and the choir a greater unity – and a new mission vision to meet your love and service in Denmark,” says Nick.
No matter where the choir came, there were new hospitable people who rejoiced their visit and song. Aura Calin adds: “It was like being able to give just a little back to DBM’s friends for the many years of work in Romania that DBM has done.”

As a family visit

Aura also says that living with the DBM friends around Gram and Brændstrup was like living with close family members. The other two agree on that, and she continues to explain that for some in the choir it was a whole new experience, that choirs and hosts gathered each morning in Gram congregational house for mornings with common singing, Bible study, and prayer. “It was also like being a big family and having an unbelievable unity.”
In addition, several noted that it hit them deeply to meet several in DBM’s work, which was high in the years and still very active in many ways. “We have a lot to learn in Romania,” says Marius.

There are more comments about the experience of Christianity in Denmark. “You are investing a lot in making your children become Christians – with both school and boarding schools,” says Marius, “continuing far beyond our tradition. Perhaps it is because you also have a struggle for revival and renewal in your churches. That’s why it was so wonderful that we were allowed to visit a number of churches and the Romanian congregation in Herning.”
For Aura, one of the highlights was the visit to the city Christiansfeld with the tour of editor Henri Nissen. “That you appreciate and spend time communicating and learning from your story and the history of your church spoke strongly to me. It was like a wonderful time trip “.

Nick finishes sending a greeting to all DBM friends and staff: “Thank you for the love that you from DBM
received us for and for the work you are still doing with us in Romania. May God bless you!“