In connection with the summer camp in the Roman village Cetateni, Gigi and Adi got together some of the boys to play football. They even appeared with jerseys from Denmark (including “Frøs Herreds Bank” on the jerseys).
Subsequently, there has been a bit of talk back and forth about how it could be used constructively for the work.

Realization of the idea

This week, Monday afternoon, Gigi and Adi collected a bunch of boys from Cetateni. This time for some training. It is supposed to be training sessions in each of the Roma villages where the DBM team holds gatherings. This training must lead them to meet for a sports event once a year. 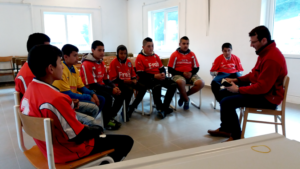 This Monday, however, it was not an ordinary football training. Instead, it was begun by a reading of a Bible passage and a prayer. It was not to make the youth better on the football pitch, but instead because football training should be seen as part of DBM’s general work in the villages. Here it’s a positive way to keep in touch with the young boys (and girls) in the villages. It’s just those who easily get drawn away from coming to children’s gatherings – and who are not ready to get into the community of adulthood in the multi-house yet. 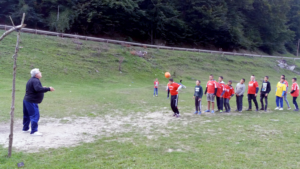