The first of the 4 summer camps in DBM’s multihouses in the Câmpulung area has already taken place. It was in the days from 19th to 23rd of June in Valea Macelarului. The next camps will be from July 3rd to 7th in Gamacesti; From July 10th to 14th in Dragoslavele and from July 24th to 28th in Cetateni. 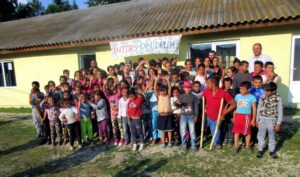 The camp’s theme this year is “Lost and Found” – and leads the children day by day with the following biblical persons:

– “Zacchaeus, saved and changed by the Lord Jesus”. The day’s Bible verse is “The Son of man is coming to seek and save the lost” (Luke 19:10)

– “Mephiboshet, accepted in the in the king’s family”. This day’s Bible verse is “For God’s grace has been revealed to salvation for all men” (Tit. 2:11).

– “Noah, a man saved from disaster”. The day’s Bible verse is: “The Lord knows the way of the righteous, but the way of the wicked goes to the ground.” (Psalm 1:6).

“The Ethiopian eunuch found by God”. The day’s Bible verse is: “The Lord made all our guilt upon him.” (Isaiah 53:6)

– “Saul of Tarsus, who was turned back by God”. The day’s Bible verse is: “Therefore, repent and turn over, that your sins may be destroyed.” (Acts 3:19).

The structure of the camps

All camps consist of a blend of bible study, of LEGO play, of sports activity and the children drawing what they have heard of. They are divided into teams of about 10 children. Each team has a responsible leader who takes care of the children – also when it comes to listening to children’s situation at home. It is planned that the leaders of the various teams will visit the children’s homes after the camp days.
The content is aimed at children aged 7 years and over. There is also a special program for children under 7 years together with the mothers. Of course, there will also be drinks and fruit / biscuits every day.

Glimpse from the first camp 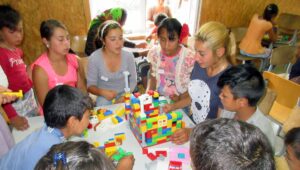 From the week in Valea Macelarului, the team in Câmpulung wrote the following:

Monday, we had the first hours of Zacchaeus. We had a bag of coins to describe what happened to Zacchaeus – how God changed him. The children listened and understood that Jesus saved him from sin and then changed his life to be filled with love for others.

The nest day they heard about Mephiboshet. The most important message is that we can be received in God’s family of grace. The children drew Mephiboshet, as they understood him from teaching.

While we went outside with the groups, they were under the age of 7 in the house to play with Lego. 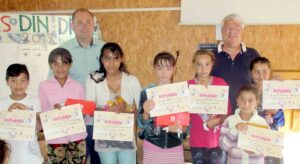 In the next days, we also had some good opportunities to tell the gospel to the children. We also had time to practice Bible verses with them. Unfortunately, we find that some of the big boys cannot read so it becomes difficult for them to learn something by heart.

We also witnessed some cheerful situations – such as that one wrote his name from behind on the back of his drawing – or him who had torn his Bible verse in the beginning of the hour, who then hurried to glue it again after hearing the content explained. 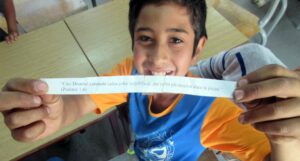 Overall, there have been some amazing days in Valea Machelarului. We look forward to the next 3 camps with great expectation for a good fellowship and that God will now bring his gospel to the children.