With effect from the beginning of July 2018, the Danish Balkan Mission has a new chairman in the 61-year-old smith Jens Rosenkrands Rasmussen. After 27 years with the same chairman of the board in Niels Arne Skov, the board has constituted Jens R. Rasmussen as the new chairman. Niels Arne Skov has been chairman since DBM was founded in 1992, now has a regular seat in the Board. 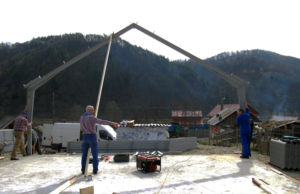 Jens Rasmussen manages the construction of the multi-house in Gamacesti

Jens Rasmussen knows DBM’s work quite well from within. Most of DBM’s multi-houses in Romania are planned and built under Jens’ knowledgeable management. Overall, he has been visiting DBM’s work in Romania app 25-30 times since 1997 with at least one visit a year. Jens Rasmussen lives in Brændstrup and is married to Britta. They have 4 daughters, 4 sons-in-law, and 11 grandchildren.

Jens Rasmussen points out that, in cooperation with the local staff, DBM makes a difference for the poor, both materially and spiritually. Therefore, he wants DBM to continue in the same spirit as previously, where mission and help for those who need follows the same path. The most important is that we must be where God wants us to be. 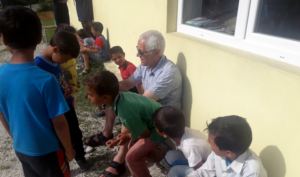 The Board is otherwise constituted as follows: