Skip to content
Hjem/News, support/School in Câmpulung Muscel has a delivery of chairs from Denmark
Forrige Næste

School in Câmpulung Muscel has a delivery of chairs from Denmark

Slightly worn chairs from a Danish school found a Monday in March a second life at a large school in Câmpulung.

A school from the western part of Denmark approached DBM if the chairs they were changing could be reused in Romania. The chairs came into the warehouse in Brændstrup, but did not stand there for long. It often happens that Gigi Gugiu receive requests from mayors or directly from schools in the area around Câmpulung. Wish lists can be long. School tables, chairs, blackboards, overhead projectors or desks / Teachers Desks. The equipment in even larger schools in Romania leaves much to be updated – while it is even worse in the small village schools. 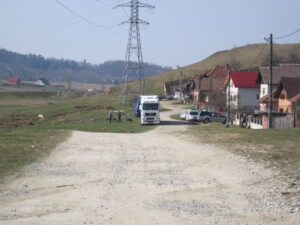 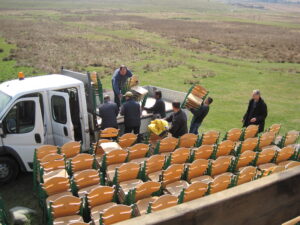 The chairs came with a truck transport. This time there was no possibility to unload in front of Gigi’s warehouse so the truck was emptied on a parallel road. All the chairs were unloaded and soon after picked up by the receiving school.

This time it was the school “Carol 1”, which could use chairs. The school was set up by the Romanian king in 1867 and has since been school and preparatory school for teachers’ education, and has had a special status in the region. Here DBM previously has been able to deliver some second hand tables and chairs. Despite the school’s high status and good look, they have not so many resources at hand as wished, as demonstrated by the facilities available in the chemistry room (no extractor and only limited equipment). 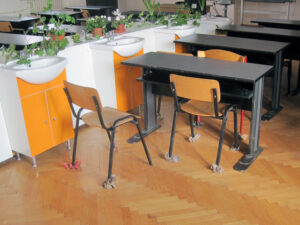 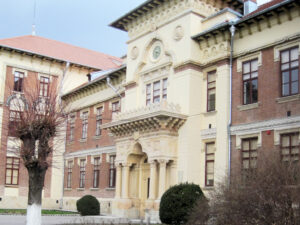