The Small Catechism in Romanian 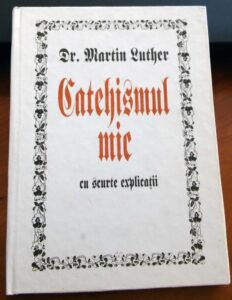 Danish Balkan Mission has tried in several ways to give support for spreading the gospel among the Romanian people – especially in the roma villages. One of the previous ways to do so, has been to help having solid lutheran books published in Romanian.

In 1996 the Danish Balkan Mission and the Nordic East Mission (both Scandinavian lutheran organisations) organized the publication of late pastor Jancu Moscovicis translation of the Small Catechism into Romanian. Most lutheran work in Romania is done in German or Hungarian, but not only have the Small Catechism been translated into Romanian, but also 3 volumes of other Luther-writings. These have been published by Logos Publishing house, Cluj, Romania. (http://www.logos.ro/…).

Pastor Moscovici was a former Jew, who had become lutheran christian through Norwegian missionaries to jews in Eastern Europe. He became a pastor in Bucharesti and served there together with the wellknown Richard Wurmbrand. Moscovici did not experience the same rough persecution as Wurmbrand, but had his children sent out of Romania (to Norway).
After Moscovici was allowed to leave Romania, he became a pastor in Hamburg, Germany – and there became engaged in the Danish Lutheran Mission, where he made radioprograms in Romanian – and had them sent trough Trans World Radio’s station in Monaco. He stopped in 2001.

Moscovici did make this romanian translation of the Small Catecism in 1996. It was first spread through the Logos Publishing house, but now there are some left over.
The books from Danish Balkan Mission – paid full in advance of printing, wo anyone, who can use a copy can order – and only pay the postage.